Credits: This page is an edited and shortened version of explanations and illustrations presented on several forums by mopar enthusiast who goes by screen name "Nacho-RT74"

The Ammeter in the Main Charge Circuit.

Ammeter needle moves in response to electrical flow.  In the most common automotive ammeters, the needle is deflected by the small magnetic forces created when current flows through the meter.  These meters are placed directly in the flow path being measured.  Some cars received externally shunted ammeters. They indicate the same information, but are wired in differently.
Automotive ammeters are wired to show the battery is discharging, charging, or neither.

Cars and trucks have two power sources, the battery and the alternator.  The output wires for the battery and alternator is joined to the wires feeding the key switch, the headlights, and fuse box at a one or more junctions.  On vehicles with an inline ammeter, this junction is usually a welded splice under the dash.

When a car battery supplies power, by common convention we say electricity flows out from the positive post at 12 volts.  The current eventually flow to ground and up the battery negative cable.  When a battery is getting charged, electricity flows into the positive post.  Electricity always flows from the highest voltage power source.  For a battery to be recharged, it must be supplied power at a higher voltage.  An alternator generates power at 13.9 to14.9 Volts.  Therefore it is capable of recharging a '12 volt' battery

While the alternator-battery circuit is often called the charge circuit, its more than that. It supplies power for everything but the starter.  Power will come from either the battery or the alternator.

The battery may supply over a 100 amps for several seconds directly to the starter when the relay closes.
A relatively small amount of current trips the relay and powers the ignition.

RUN when Battery is Somewhat Discharged (after Start)

Current from alternator goes to main junction.
Only current for recharging the battery goes through the ammeter. 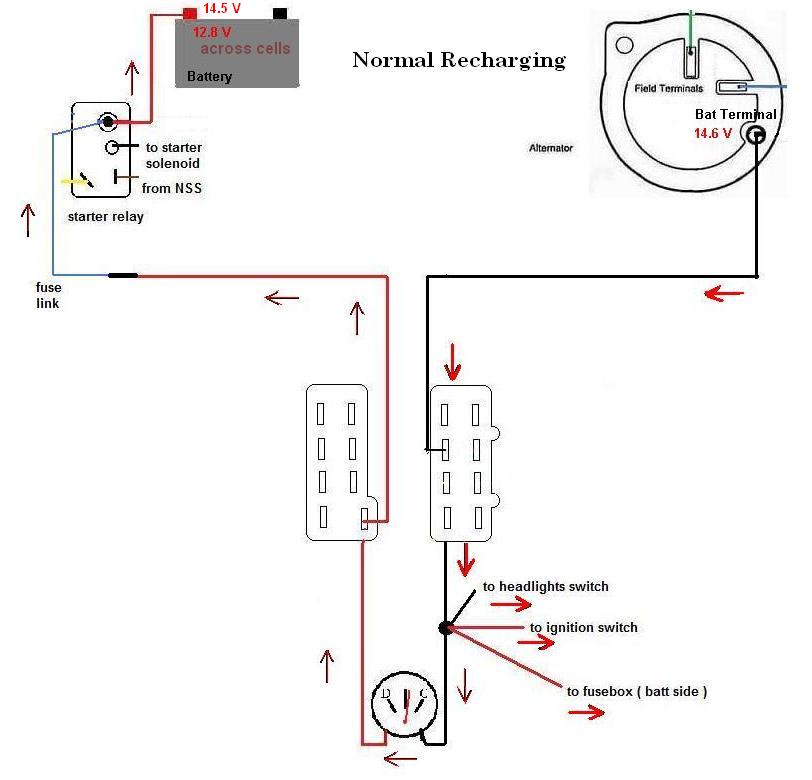 RUN When Battery is Fully Charged

When the battery is fully charged, no power flows through the charging wires or ammeter.

Connections:
1. Check for oxidation, corrosion, loose connections especially at bulkhead.  Clean, tighten, fix as needed.
2.  An option is to create better connection or directly wire the feeds through the firewall, either in parallel to, or replacing the bulkhead connections.
This is essentially the same as Chrysler's modification for certain fleet use applications and keeps the ammeter.
Another version of this concept was used for later A-bodies equiped with rear window defroster grids.
3. In theory an option is to rewire the circuit using a remote shunt ammeter.  At least some Chrysler vehicles used a remote shunt ammeter starting in 1976 as did some other companies (but not AMC/Jeep).  (ref. Rick E. Mopar Action reprinted at allpar.com)  Aircraft supply houses are another source of remote shunted ammeters/

High Rate of Charging:   Maintain battery in good condition.  If battery is low, keep alternator speeds down and monitor ammeter.  Shut off if current is excessive. Use an alternator that can keep up with expected power needs at idle.  Do not simply use an alternator that is rated high output, especially if not needed.  Output goes up with rpm, if the extra current is not needed but the battery is low, it will send all that current into the charging circuit.
* Photo sequence of low battery being charged. (posted on For A-Bodies Only).
* More info on alternator rating games, on Speedtalk forum

Circuits: If adding headlight relays or other high current circuits, draw power directly from the alternator.  Add fuse or circuit breaker for each new circuit.

Complete thread by NachoRT74 et al on improving the charging system while keeping the ammeter.  (on Dodge Charger forum)

Disclaimer:
Advice and information provided for discussion and to be helpful.  Neither myself or Nacho can be liable for your decisions or workmanship. You need to make your own decisions, and know about or discover the risks before barging ahead on any endevour.

Claimer:
The information and pictures on this page are free to use and share by all and may not be sold.  You may not sell anything that I or Nacho has written or illustrated.  If you wish to quote something, you are free to do so.  All I ask for is proper credit.  Credit diagrams on this page other than 67 Complete Charging Diagram  to NachoRT74.
May 2022 rev2 WiP